The Swiss Flag of Vitznau

Every summer the Swiss flag is hung upon the Steigelfadbalm-Dossen, a large rocky outcrop on the Rigi massif. Unfurled as a landmark over Vitznau, the flag reflects that it the village remains down-to-earth, but is always forward-thinking.

Key Facts about the Swiss Flag

The flag's dimensions have almost tripled since its initial hanging. The sight of it always stirs pride in the residents of Vitznau.

Five Facts about the Swiss Flag in Vitznau: 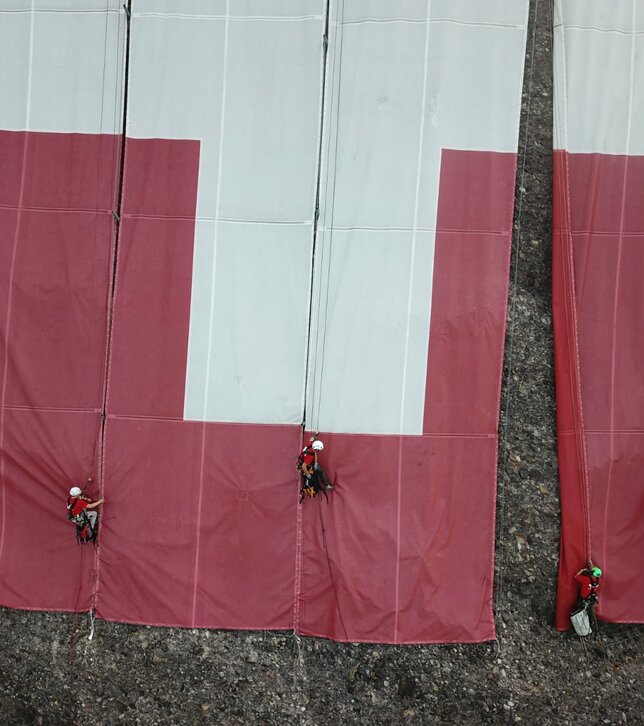 It all began with an idea from climbers Röbi Küttel and Flavio Huber. Excited by their inaugural ascent of the Steigelfadbalm-Dossen and the amazing view they discovered there, they came up with a plan to bestow a special accent to the cliffs.

Without further ado, a Swiss flag was fashioned from a 12x12 meter cloth, which was finally attached to the Steigelfadbalm-Dossen one day before August 1, 1986. The project took a whole day, but the effort was worth it. Everyone was thrilled with the result. However, due to lack of sponsors, the flag was not reinstalled in the following years.

It was only six years later that the flag again fluttered from the ledge, this time with dimensions of 16x16 meters. But it turned out to be another one-shot deal. Since 2000, the flag has returned to this spot every summer.

No expense or effort is spared to raise the flag – despite a few hiccups here and there. It was destroyed by the wind in 2000 and, the following year, it was accidentally discarded! In 2006, the Swiss flag shared its place with the Brazilian flag: when the Brazilian national team chose the neighboring village of Weggis as its training location for the World Cup in Germany, their colors were raised to welcome them.

In 2020, the flag was unfurled for a twentieth time. The coronavirus pandemic prevented celebrations to mark this milestone, but the excitement was unwavering. For locals, the flag remains an emblem of creativity, resilience, vision, tolerance, and freedom.